Raj Setty of Life Beyond Code has created an amazing series. Raj has coined the word "quought" which is a question that provokes thought.  Raj describes his series:

So as we approach the new year, I thought posting a series of questions that people should consider asking themselves in 2007 to get more out of their life or business or both. Since there is only so much that I can do alone, I reached out to several influencers and thought leaders to get those questions. Here was the question I asked these thoughtful, kind and smart people:

So, what is the one important question a person should ask himself or herself in 2007?

I’m very proud to have been asked.  My question appeared yesterday and here’s what I asked: 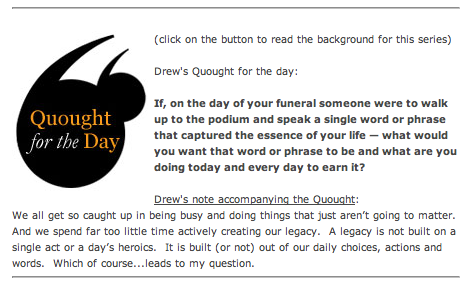 Check out the whole series on Raj’s site.  You will find yourself completely engaged.