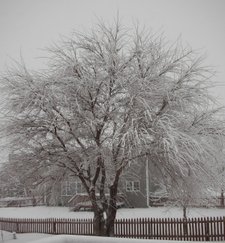 8+ inches of snow fell on us over night.  Hundreds of churches and other organizations cancelled their Sunday events.  Reporters told us to stay off the roads.  Almost 200,000 were/are without power.

But what does the snow mean?

It would be easy to only see it from my own perspective.  Using that single lens focus we discussed in an earlier post.  But what happens when you actually take the time to walk around an issue, thought, product, client and take a 360 degree view?

For me, the snow is beautiful.  Having grown up in Minnesota, I love the snap of cold, the crispness of the snow and the serenity in the blanket of white.

For my dad, who’s flying here from Sarasota today, it’s a reminder of why he left the Midwest and no doubt will be a source of much grumbling over the next few days.

For the neighborhood kids, it’s an imagination overloaded play land filled with an ice fort’s construction materials, bombs to be lobbed, and snow people to be  birthed.

For my friend Steve, whose daughter was at a weekend church retreat deep in the woods and about an hour away, it brought worry about how to retrieve her safely.  (We took my 4-wheel drive…all is well!)

For my daughter, it was a close but no cigar.  24 hours later and we’d have had a snow day.

For Mark the guy who runs a snow removal company, it was cha-ching and relief after a very slow season.

For the families without power, it was a potential crisis.  No heat brings frozen pipes, no way to keep the family warm, and a huge hassle.

A relatively simple thing.  A snow storm.  And yet to each different audience, its importance and meaning was very different.

As you approach a marketing project — how often do you "place the item in the center of the table" and walk around it, describing it from different perspectives.  We know people buy based on emotional responses.  This snow storm brought a sense of calm/serenity, disgust, frustration, glee, disappointment, worry, relief, and panic.

Wow…those emotional truths are tools for a marketer.  With a better understanding of people’s reactions to an event, product or service — you can talk to them in a way that will resonate with those emotional realities.

But only if you take the time to understand them.