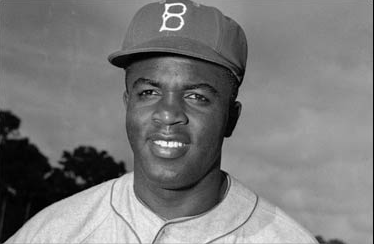 I went to a AAA baseball game today and was reminded how inspirational the game can be.  Today was Jackie Robinson Day. They showed a brief video that celebrated what he was all about.  I will admit, I got a bit choked up.

60 years ago, Jackie Robinson did what no black man had ever done.  He put on a major league baseball uniform and played along side white players.

And the part that people seem to forget is that Jackie’s breaking the color barrier was just the beginning of his struggles. Even after joining the team, he had to stay in different hotels, endure death threats, and dodge players who slid so they could drive their spikes into his shins and pitchers who hurled fastballs directly at his head.

His own teammates (not all of them) got up a petition to keep him off the team.

But he believed in what he was doing and so he persevered.  One of my favorite Jackie Robinson quotes is "A life is not important except in the impact it has on other lives."

Jackie Robinson’s life had a purpose.  Something he believed in strongly enough that he was willing to suffer the consequences.

I’m not beginning to suggest that any company’s brand is going to equal the courage of someone like Jackie Robinson.  That would be insulting to what Robinson endured.

If your brand doesn’t inspire that kind of passion in you or your employees, how will it ever touch your consumers?

8 comments on “A branding lesson from Jackie Robinson”