I jumped into the middle of this story, so that’s where I’d like to start with the telling as well.

Many of us have enjoyed Marcus Brown’s blog It Could Get Worse for quite some time. Smart, funny and willing to really take a chance.  He had no fear and no pre-conceived ideas of what his posts or positions should be.  He just went with it.

Think of this post as a very poor man’s Brownesque post.  Just let me go with it and come along for the ride.  This is an interesting study in viral marketing, social media and a brilliant but warped mind.

Here’s how my version of the story started.

Sometime in April, I went over to enjoy Marcus’ wit and I happen upon a post where he is soliciting ideas on how he can sell a painting.  This painting. 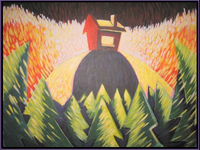 I got the general gist.  Marcus created the work of art because a buddy of his was somehow saved by some Mountain Rescue group.  What caught and kept my attention were the hilarious suggestions about how Marcus could raise more money. Right in the middle of the comments, someone suggested that to truly get a good price for the work, sadly Marcus would have to be dead. Only dead artists commanded top dollar.

Then, I started laughing out loud at some of the suggestions as to HOW Marcus could meet his untimely death.  I particularly remember the riff about him choking on a sausage.  Funny stuff.

I didn’t think too much more about it. Then a week or so later, I read that Marcus has pulled the plug on his blog.  I couldn’t believe it. I rushed over to see.  No goodbye post to speak of.  No explanation. No archives. Just gone.

Wow, I thought.  Marcus must have been really burned out. To just pull the plug.

Boy, did I not understand how much of his plug was truly pulled.

Until I heard he was dead.

And not only is he dead, but he’s blogging about it.  And he even sent a YouTube video to reassure us that he’s okay.

What I find remarkable about this is that I didn’t get it for quite a bit.  I honestly thought Marcus had just called it quits.  Which is one of the elements of a good viral marketing campaign.  He let me stumble upon it and discover it.  He didn’t package it or worry that I might not get it — so he had to lead me by my nose. He had faith in his audience and his idea — so he tossed it all in the air to see what would happen.

But of course, what I’ve now discovered is that this lunatic is/was (guess we should talk about him in the past tense) willing to sacrifice what he had built in the blogosphere for the sake of an experiment.  An experiment with a good cause attached. Could he in fact, raise more money this way?

How many of your successes are you willing to just walk away from to start from scratch?  To see if you can be successful in a different way?

Are you brave enough?

Is the medium forgiving enough to tolerate this time warp/parallel universe existence?  Will his audience support him even though what he’s now offering is completely different?

What, if anything, will be the cost to Marcus for "killing" himself and his alter-ego, Sacrum?

Will his readers help him reach his goal? And what happens after the painting gets sold?

Viral marketing takes guts and faith.  Do you have enough of both?

The missing parts of the story:

Early in March, Paul Colman over at Life in the Middle posted a chilling story about how he and a friend were caught in an avalanche and had it not been for the mountain rescue squad, the end of the story might have been very tragic indeed.

Marcus Brown read this story and decided to raise some money by selling a painting.  (start at the top now)

2 comments on “Jumping into the middle, Marcus Brown is dead, and Elvis loves cribbage”