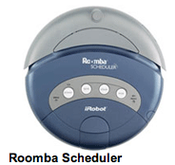 We have one of those roomba robotic vacuum cleaners.  It’s a beautiful thing.  You stick it in the room, hit clean and away it goes.

Eventually, it has covered the whole room.  Not in a straight line but by making many, many slight adjustments until it finds the light of day.

Marketing is a little like that.  Sure, sometimes we hit it out of the park with one ad, event or website.  But more typically, it is about doing the same things over and over and making minute adjustments along the way.  The key is the persistence.  Believing in what you’re doing and be willing to bang your head a few times as a trade off for the eventual success.

As you might know, one of my personal heroes is Walt Disney.  He chased his dreams despite bankruptcies, nay sayers, rivals stealing his ideas and a lifetime of hearing the word "no."  Tim Siedell of Bad Banana Blog puts a different spin on Walt’s struggles.

Do you have the roomba spirit?  Are you willing to bang into a few things to get the job done?  Do you believe in what you’re doing as much as Walt did?

2 comments on “Keep banging into those walls”