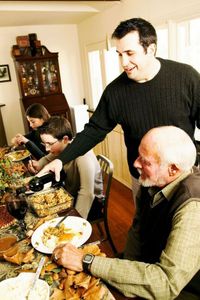 Shama Hyder asked the question…if you could share a dinner with five people, who would you choose?

So, I decided to narrow the options and choose people who have had an impact on marketing and branding.

David Ogilvy:  I doubt anyone in the business doesn’t respect the work and brilliance of Ogilvy.  He was the master of memorable positioning and headlines that became battle cries.

Steve Jobs:  Love him or hate him, love Apple or be a fool (sorry couldn’t resist) — Jobs has proven to get branding.  I’d love to talk to him about how he was able to stay the course with Apple’s brand when the world was telling him to conform or hang it up.

P.T. Barnum:  While he didn’t ever work at an advertising agency, he knew all about selling the steak by emphasizing the sizzle.  But he despised dishonesty and  exposed  those who he felt were being fraudulent.

Leo Burnett: Burnett proved that you didn’t have to be in NYC to build a powerful agency.  Burnett built his agency in the heart of the Chicago loop and argued that visuals appealed to the "basic emotions and primitive instincts" of consumers.

Walt Disney:  No list of marketers would be complete, in my opinion, without Walt.  He  has some of the traits that I  believe are essential to be a good  marketer.  He was curious,  wanted to create the ultimate customer experience, tenacious, and had a vivid imagination.  All of that was wrapped in a passion that could not denied.

There you have it.  Can you imagine sitting around a table with these men?  Wow…what a conversation that would be.

So how about you — rather than tagging anyone specifically, I invite all of you to play along.  Just link back to this post and to Shama’s.

2 comments on “One dinner, five marketing legends and me!”