Before the game, I was adamant.  My biggest hope was that Bonds did not hit his home run during MY Dodgers game.  I didn't want it to taint the experience.

We had amazing seats.  One row off the field, half-way between left field and third base.  You couldn't ask for better.  It started the top of the 1st inning.  When Bonds came up to bat — the crowd booed and hissed.  Not very sportsmanlike, but I understood their sentiment. 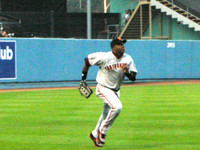 Bottom of the first, Bonds trots out to left field and the taunting got even worse.  It was relentless and stupid. And with every inning (and no doubt, with every beer) it got louder and more obnoxious.   Every time he made a catch, they screamed.  When he waited for the batter to swing, they jeered.  When he warmed up, they chanted obscenities.

And a very strange thing happened.  I started to feel sorry for Barry Bonds.  Did he bring it on himself?  Yes.  Do I think he cheated?  Yes.  Did I wish he wasn't breaking the record?  Yes.

But, did he deserve to be screamed at while he tried to do his job?  No.  Did he deserve the racial slurs?  No. Were the guys shouting at him insulting the game too?  Yes.

There's an important lesson in this for all of us.  It's easy to portray the competition as the villain.  But that's a very fine line to walk.   Comparisons are fine.  But taking a shot that really hits below the belt can quickly transform your competition from villain to victim.  Which turns you from hero to bully.  Bashing the competition is never going to serve you, long-term.

All of a sudden you can shift the balance and once you don the black hat, it's pretty tough to take it off.

A side note: Barry Bonds broke the record tonight. While I have more empathy for the situation he behaved himself into, I can't say I cheered as he waved to the crowd.  But I didn't boo either.