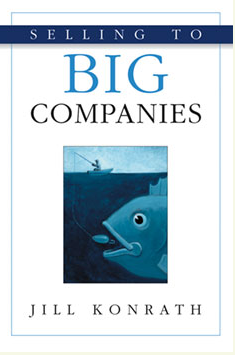 A week or so ago, I offered to have a drawing for a free copy of Jill Konrath’s excellent book, Selling to Big Companies.  All you had to do was share in the comments or e-mail a sales lesson, tip or horror story we could learn from to be entered into the drawing.

We got a few entries via the comments but several more in e-mail.  I thought I would share them with you and then announce the winner!

My biggest sales mistake is when I don’t know enough about the company or the person I am meeting with.  If I can’t talk about them and their challenges, then the only thing left to talk about is me and our product.  Once we start going down that road, I know I am sunk.

In the late 90’s I was invited to travel to Tokyo and meet with the man who could open up the Japanese market to our company.

Having completed cordialities, we started our very formal meeting. After about 20 minutes of fact finding conversation from both sides, I asked him through his interpreter if our design firm could prepare a proposal for him and send it over for he and his staff to review.

In amazement we watched him look down at the table, ponder for a moment, slowly push his chair back and stand up.  He bowed.  Said nothing and walked out of the boardroom. The corporate interpreter said the meeting was over and thanked us for coming.  We were in the elevator just as fast as she could bow and say goodbye.  Our personal interpreter said that he would share with us at the bar what had happened.

It turned out that I had put him on the spot.  By asking him my question, he was unable to answer it without total disgracing himself in front of us and his staff. I had asked him a question that he would ultimately have to take to his subordinates to discuss before it could be answered.  So, he was now in a shameful position because he could not answer properly.  The only way he could deal with the situation was leave!  Meeting over.

I know this is probably been said a thousand times, but I get on the good side of the gatekeeper.  She holds the key to where I want to get and she can make or break my efforts.  I have found that you don’t have to get ridiculous.  You just have to actually notice that they’re there and engage them in conversation.  Most people treat them like they’re invisible.

Offer an guarantee.  The reality is, most of us have an implied guarantee anyways.  So why not make it explicit?

Ask open ended questions that require more than a yes or no.  And then build off that answer, asking a more probing question.  Get the prospect to tell you stories to illustrate their pain points.  If I hear myself talking for more than 60 seconds or so, I know I need to ask a question and then shut up.

Do something they will remember and tell other people about.  Odds are, they are talking to several vendors.  You need to be the one they remember.  Do something remarkable enough that you know they won’t be able to resist telling someone about it.

And the winner of the book — John Siberell, one of our e-mail entries.  Congrats John.  Watch for an e-mail from me!

Don’t forget that Jill is also throwing the sales conference that’s a not to be missed for women who want to take their sales skills to the next level.  Minneapolis. November 5-6.   You’ll learn enough within the first hour to cover the investment and more.