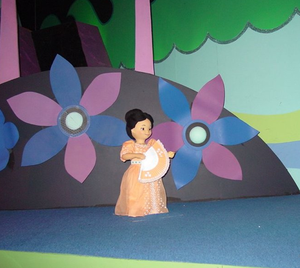 One word of advice for Drew and family as they enjoy the annual pilgrimage to the wonderful world of Disney: steer clear of It's a Small World. Talk about things that are “sticky” … you don't even have to get on the ride. All you have to do is walk in front of the Small World pavilion and that annoying theme song will be stuck in your head for days!

At Disney the tiny animatronic dolls representing countries around the world have been a phenomenal success. What about your business? Are there small things you could do to produce big results?

Recently Hugh McLeod wrote about using micromedia for micromarketing the new labels for South African wine Stormhoek. Previously the company has sponsored large celebrity-driven geek events; now they're about to host a number of small, intimate gatherings—and they're using the microblogging service Twitter as the promotional vehicle. (Note: the offer is limited to UK Twitter users, so don't bombard Hugh with requests from other countries or through his blog. It's not that small a world yet.)

Why the switch? Here's what Hugh said:

When we sponsor large parties, nobody notices, talks about, or remembers the name of the wine that was served that evening. With smaller parties, the opposite is true. People seem truly appreciative that a commercial wine business would go to all that trouble, just to reach out to so relatively few people. But why not? From trying to connect with people on a much more intimate and human level, we have far more stable and stronger building blocks to create a community around our brand.

Stormhoek's mass market is everyone who drinks wine, and the label is sold in major retailers. However, their primary marketing venue has been the blogosphere. Now they're further refining a niche market strategy: find small groups of wine drinkers among early technology adopters (i.e. Twitter users),  send sample bottles of wine for those who want to host a dinner party, and generate word of mouth buzz.

Instead of occasions for celebrity-sightings, the small dinner events are likely to stimulate conversation about the quality of the wine and its unique marketing strategy. Stormhoek is hoping to build brand evangelists and to develop a loyal community among a relative handful of people who have a proven habit of answering the question: What are you doing? (Twitter's raison d'être.)

What lesson can you learn from Hugh McLeod and Stormhoek? Can you pare down your marketing budget while beefing up results through smaller, more targeted campaigns?

Drew's Note:  Connie Reece blogs at Every Dot Connects and is the the founder of Reece & Company.  When it comes to mixing social media principles with PR and marketing tactics, Connie is one of the experts.  I had the privilege of meeting her at SOBCon '07 and she's the real deal.