We’ve certainly talked taglines before.  When they’re right — they can be an incredible tool for a business.  Sadly, they’re not usually right.

Kevin Horne (from whom I stole this post’s headline) wrote about a British paper having some fun with their readers, asking them to come up with a tagline that describes what it’s like to be British.  My favorite…."at least we’re not French."  Good to see that geographic rivalries exist outside of the states as well.

Kevin goes on to list 3 taglines that were dead on.  Ironically, none of three are being used today.  They were great and replaced with pablum.  It happens way too often.

Let me add to that list with an example that is enough to make a marketer cry.  Michelin Tire’s tagline "because so much is riding on your tires" was brilliant.  It spoke to the buyer’s deepest emotion and fear. 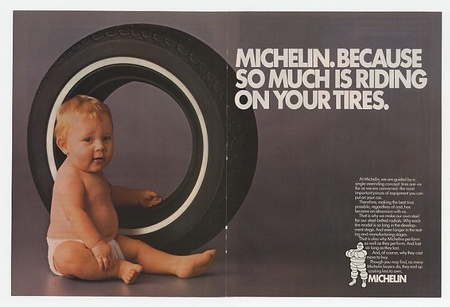 And then, of course…they changed it.  Ready for the absolutely remarkable tagline that would justify walking away from "so much is riding on it?"

Yup….you read it correct.  I often wonder how someone presented a particularly bad idea in such a compelling way that everyone around the table bought it.  This is one of those instances.

"Hey….let’s trash the tagline that differentiated us, identified a clear advantage, triggered the buyer’s deepest emotions and has incredible mind share already with something that says absolutely nothing and ANY tire company could use."

No wonder they changed it.

Why do you think most companies don’t really understand taglines?

20 comments on “Two types of tagline – great and “other””