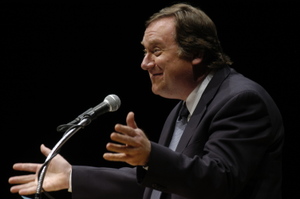 The world, but especially here in the United States, is still stunned by Tim Russert’s sudden death yesterday.  The accolades and eulogizing has begun as people grapple with his passing and I have no doubt much will be written about the native New Yorker and political junkie.

I must admit, this is not an entirely objective commentary.  I liked Tim Russert a lot.  I respected him for his knowledge and ability to reduce the complicated to the simple.  I trusted him.

I trusted him.  There’s the key sentence.

He was passionate:  Tim Russert loved the political process.  He loved asking tough questions.  The crazier it got, the happier he got.  His passion was contagious.  His reporting took us past the hype and the circus and got us interested in the real deal.

He was authentic:  He never tried to be anything other than what he was — a kid who grew up in Buffalo, NY.  The son of a sanitation worker.  A working class Irish Catholic.  He brought his life’s experiences to his work.  It made him tangible to us.  He wasn’t all that different from us.  Even though he hung out with Presidents.

He was likable:  He was affable.  He talked like a normal person.  He used stories to explain complex topics.  He wasn’t over-polished or perfect.  His hair was always a little mussed.  He reminded me a a big, friendly dog.  There was nothing scary or intimidating about him.  He was a guy that you knew would be cool to just hang out with.

He wore his emotions on his sleeve:  While his reporting stayed objective, his enthusiasm for the whole thing was apparent.  He loved what he was doing, he loved talking politics.  He loved the battle and the debate.  That was a big part of how we knew he was authentic.  He didn’t try to keep us at arm’s length.  He invited us in to share in what he loved.

He was consistent:  Tim Russert was grounded.  He had a code of ethics and morals that created his course of action.  He defined his own professional (and I suspect personal) right/wrong meter and he used it to guide him.  He understood his own brand and the beliefs that the brand was built upon.  That allowed him to deliver a consistent product every time.

There will be much talk about Russert’s impact on politics and journalism over the next few days.  And rightly so.  He was brilliant at his craft.

But I suspect many will mourn his passing for the same reason that I do — I liked and trusted him.  That’s rare in today’s over-spun media world.  And it’s equally rare among brands.

The sign of an extraordinary brand is that we can’t imagine what we’d replace it with.  The next few months are going to be very heated as the United State’s next president is elected.  I can’t imagine who could possibly take Tim Russert’s place.

He will be sorely missed by me and by many.

Update:  Jim Kukral used this post as a launching pad for his own thoughts on Russert in his daily video series, The Daily Flip.

Jann Freed adds her thoughts to the discussion, calling Russert a sage.

Steve Cranford shouts out to this post over at Whisper Brand.

15 comments on “Tim Russert — a lesson in branding”