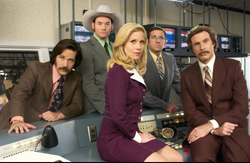 Drew’s Note:  As I try to do every Friday, I’m pleased to bring you a guest post.  Meet another marketing thought leader who shares his insights via the blogosphere. So without further ado…Josh Klein.  Again. Enjoy!

In the movie, Anchorman, there’s a moment when the character played by funny man Steve Carell becomes so overwhelmed by the volume of the conversation – and the lack of attention being paid to him – that in a desperate plea to have his voice heard above the din, he shouts, "LOUD NOISES!"

Steve knows about bad advertising. We all do.

And yet so much advertising is just companies shouting loud noises. We’re all susceptible, as business marketers or just people who want to be heard, to be a part of this system.

It’s not that you wanted to be loud, but you couldn’t help it. It’s a "collective action problem", a tragedy of the commons.  We’d all prefer everyone being quiet to everyone being loud (less noise in our lives and less spend on ad dollars), but as long as everyone else is quiet, we cheat a little and raise our volume. And so does everyone else.

It’s a vicious cycle. As it continues, your message has less impact (people ignore it) but you still get louder (costs more money).

How many of you own a Tivo? The great thing about Tivo is it lets us skip commercials. The point of watching television is to enjoy the show. In my case: Dexter or Mad Men (serial killers and advertisers, oh my).

The commercials interrupt us, and that pisses us off.

Commercials are usually noise, so we ignore them or skip them. Some TV commercials are really loud, like during the Superbowl, so we watch those, but only out of a morbid curiosity about their inappropriateness.

We live in a world where thousands of marketing messages hit us at every turn. We’ve gotten really good at ignoring it, just like when we stand in that crowded cafeteria where everyone else is having a conversation. We just tune it out.

Americans watch 100 million hours of TV commercials a weekend, says Clay Shirky. (watch him speak at Web 2.0 Expo)  How many do we bother paying attention to?

But there are some commercials we rewind the Tivo to watch, like the Sony Bravia spot (filmed on the street of my old office) or the early Halo 3 teaser.

You don’t have to play the noise game. Drop the whole paradigm, it’s dead. You want to be in the signal game.

But wait, aren’t those features? Isn’t that useful? Isn’t that what people want to know about?

Yes. Why aren’t your ads?

I don’t pretend it’s easy to make signal advertising. It requires thinking less about yourself and more about your customer. The mindset has to be "what does my customer want?" instead of "how can I make my customer want what I have?"

And you can go too far. Ads made purely to entertain with no connection to the brand don’t do you much good. It has to be a careful balance.

Have you seen some great signal advertising? Please let us know in the comments.

Josh Klein hates buzzwords, but his factory label reads "fully buzzword compliant." As a digital marketing strategist based out of New York, he ponders how to make the web a better place for businesses, individuals, and civilization. You can read his Tuesday-morning musings for free at Josh Klein Web Strategy.