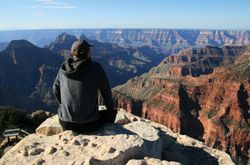 I spent the day on Friday at the Maximum Impact Simulcast, listening to the likes of Tony Blair and John C. Maxwell talk about leadership and courage.  It’s inspiring.  It makes us want to be our best self.  Who doesn’t want to be seen as an amazing leader?

I think it’s natural after spending a day at that sort of an event, to look at your own life, to see if you can see a glimmer of that greatness.  As I let my mind wander over my own choices, I couldn’t help but notice that there’s a pattern to my life’s greatest and most fulfilling adventures.

I blundered into them.

Now I don’t mean to make myself sound less accomplished but the truth is, my life’s biggest adventures began with one common denominator – I had no idea what I was getting into.  No amazing courage.  No brilliant insights.  Just me, blindly stepping off the ledge, having absolutely no idea how far down the drop was.

The good news is that it meant I was also not afraid.  I probably should have been – but because I didn’t realize the enormity of what I was doing, I actually blindly strode into the new opportunities with incredible confidence and enthusiasm.

Perhaps that’s not such a bad plan.   Look at what it got me.

Becoming a dad:  Totally clueless.   Yes, I read a couple parenting books but they talk about how to diaper and feed, not the real parenting stuff.  I could not possibly have imagined that the arrival of this baby would literally re-write my entire life, my work schedule (I have left the office every day at 3 pm since she entered pre-school) and my life’s priorities.

No amount of worry could have prepared me for some of the conversations we’ve had, some of the split second decisions I’ve made or the depth of love that underscores my relationship with my daughter.

Opening my own agency:  I’d love to tell you that I had a well written business plan, a stash of cash to fall back on or several clients waiting in the wings.  But none of that is true.  And yet, it didn’t occur to me that it wouldn’t work.  I was 32, naïve and had an incredibly talented business partner (who has since gone on to different successes) who was as clueless as I was.

No amount of hand wringing could have prepared me for twists and turns of being a business owner, the excruciating decisions I’ve had to make, or the many relationships we’ve been lucky enough to earn and enjoy.

Had I been logical or even deeply thoughtful about either decision – I very well might have decided that the potential risks outweighed what I thought were the potential gains.  Man, would I have been wrong.

We’ve all heard the Redmoon quotation “Courage is not the absence of fear but rather the judgment that something else is more important than fear.”

I wish I could tell you that I consciously decided that being a dad or owning my own agency was more important than the fear but I just didn’t feel any fear until it was too late – I’d already stepped off the ledge.  At that point, when the fear appeared, I had no choice but to push it aside and keep trudging forward.

Why am I telling you all of this?   Because I suspect that someone reading this right now is afraid and can’t pull the trigger on a dream.

What are you worrying about right now?  What is fear keeping you from trying or risking?  Are you letting the economy, a golden handcuff job, a pending retirement or something else keep you from stepping off the ledge?

You’re probably smarter than I was….I blundered into my life’s best decisions wrapped in complete ignorance.  You know what the risks are.  You know all the pros and cons.

But what you might not know is the remarkable rush that comes from just spreading your wings and taking the leap.  What you probably haven’t considered is that those wings and the winds of chance might take you to a place more dazzling and delightful than you could possibly imagine.

Ignorance for me.  Courage for you.  Maybe it doesn’t matter why you leap.  Just that you do.

23 comments on “Be not afraid”