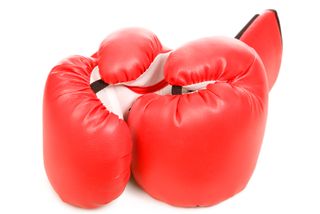 How many movies have you seen where a pivotal scene is played out on the playground.  The protagonist and the antagonist square off, ready to duke it out.  They are surrounded by other kids, shouting “fight, fight!” with great enthusiasm.

I’m not so sure we outgrow that instinct as we become adults.  There is something very primal and very intoxicating about a good fight.  But as adults, rather than gather on the playground, we gather in courtrooms, legislative bodies, corporate America and the media.

Whether you are old enough to remember the battles between Burger King and McDonald's played out in their TV spots or enjoy the current bickering between Apple and Microsoft (or as it plays out…Macs versus PCs)…  there are lessons to be learned from these skirmishes.  It’s good to know the rules before you roll up your sleeves.