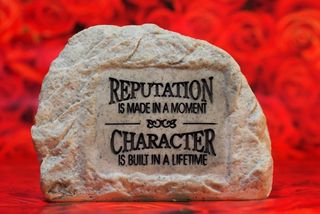 Drew's Note:  As I try to do every Friday, I'm pleased to bring you a guest post.  Meet a thought leader who shares his insights with clients every day. So without further ado…Freddy Nager.  Again. Enjoy!

Not since Sarah Palin claimed "executive experience" has anything this silly been uttered about top management.

I recently met a consultant who argued that all corporations should have a "Chief Reputation Officer." The CRO's responsibility would be to monitor, protect and promote the company's reputation. I noted that this consultant was a "reputation specialist" by trade, so I detected a little self-promotion going on.

Now, I won't begrudge anyone a good job in this economy. We should all aspire to higher responsibilities and rewards, particularly if they include health care with dental.

I also agree that corporations should manage their reputations as diligently as they manage their money. While the consultant and I debated, Microsoft unleashed an ad nicknamed "OMGIGP" for "Oh My God I'm Gonna Puke."  Really. The ad featured a woman vomiting. Microsoft quickly withdrew the ad after bloggers and consumers broke into protest and ridicule.

Hmm, maybe the Jerry Seinfeld spots weren't so bad after all…

So, yes, Microsoft tossed its reputation to the curb. But would appointing yet another exec at a top-heavy corporation make a difference or even marketing sense?

Imagine investor response to hiring yet another C-level exec just to monitor reputation — particularly since a company's reputation should be the responsibility of every executive, board member, and employee. True, a "czar" could help manage reputation matters, but that person already exists: the Chief Marketing Officer (or VP/Director of Marketing). If your CMO isn't managing your reputation, time to send 'em packing.

Reputation is part of a company's brand, and branding is to marketers what money is to financiers. It runs in their veins. They eat it for dinner. It's their job. Hiring a CRO in addition to a CMO is completely redundant — and a recipe for corporate politics from hell. (Never spur rivalries between execs capable of writing lethal emails.)

I've also heard of other contrived marketing positions, such as VP of Branding Strategy and Image Officer. They can nuance their job descriptions to perfection, but they simply add another layer of bureaucracy. Such jobs would entail reviewing every communication, product and policy before public release, and predicting how they'll be received by customers, employees, shareholders, the media, the community, etc.

Once again, the job of the CMO.

Now, if you don't already have a marketing exec, your company is only running on three legs. In that case, your President, ad agency, or publicist should oversee reputation. A CRO? No, not even if you have money to burn.

As a marketer who teaches aspiring marketers, I love seeing more opportunities in marketing, but contrived executive positions only hurt a company's brand — almost as much as commercials of women puking.

Freddy J. Nager runs the L.A.-based marketing agency Atomic Tango and blogs at Cool Rules Pronto.  Over his 20-year career, he has directed campaigns for agencies Saatchi & Saatchi and Magnet Interactive, and for such clients as MCA Records, Nissan & Infiniti, and numerous startups. Freddy holds a BA from Harvard and an MBA from USC, and teaches marketing at Antioch University and the University of Wales/Robert Kennedy College.