Okay, so maybe that isn't so surprising.  But how about this…they'd also give up their Pradas (shoes and purses, guys) or chocolate before they'd give up their social networks.

But, if Facebook or the others began to charge a fee for membership….50% of the women would bolt.

So says a study done by ShesConnected Multimedia.

More than one-third (36%) of online US and Canadian women would give up chocolate, their Pradas, or their mother-in-law before they gave up their social networks, but only half would be willing to pay subscription fees to continue using such networks, according to a research study and report by ShesConnected Multimedia. 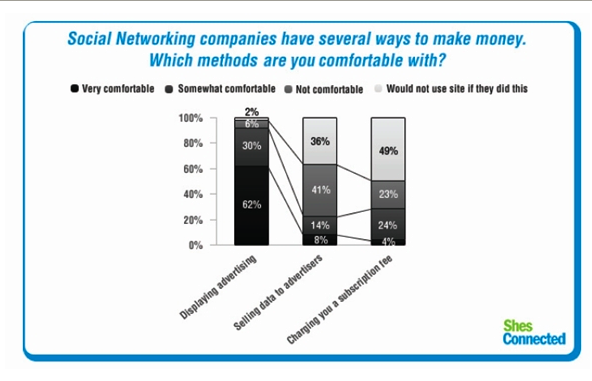 The study, “The Power of Social Networking for Women,” asked women in the US and Canada how they are using social networks and found that 53% of online women use social networks at least weekly, and that social-networking women – most of whom are highly engaged and comfortable with technology – are one of the fastest growing segments on social networking sites.

The study also looks at what features are must haves, reasons for belonging etc.

Check out these additional stats from the report: