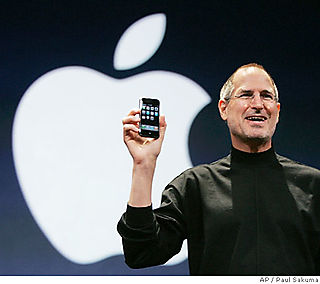 Drew's Note:  As I try to do on many a Friday, I'm pleased to bring you a guest post.  Meet a thought leader who shares his insights every day. So without further ado…Carmine Gallo.

Apple CEO Steve Jobs is considered one of the greatest marketers in corporate history. For more than three decades, he has delivered legendary keynote presentations, raised product launches to an art form and successfully communicated the benefits of Apple products to millions of customers. Whether you're in sales, marketing, advertising or public relations, Steve Jobs has something to teach you about telling your brand story.

Plan in analog. Steve Jobs may have made a name for himself in the digital world, but he prepares presentations in the old world of pen and paper. He brainstorms, sketches and draws on whiteboards. Before a new iPhone, iPod or MacBook is introduced, the Apple team decides on the exact messages (aka, benefits) to communicate.

Those messages are consistent across all marketing platforms: presentations, Web sites, advertisements, press releases, and even the banners than are unfurled after Jobs' keynote.

Create Twitter-friendly headlines. Can you describe your product or service in 140 characters? Steve Jobs offers a headline, or description, for every product. Each headline can easily fit in a Twitter post.

For example, when he introduced the MacBook Air in January, 2008, he said that it is simply, "The world's thinnest notebook." You could visit the Apple Web site for more information, but if that's all you knew, it would tell you a lot. If your product description cannot fit in a Twitter post, keep refining.

Introduce the antagonist. In every classic story, the hero fights the villain. The same holds true for a Steve Jobs presentation. In 1984, the villain was IBM, "Big Blue." Before he introduced the famous 1984 ad to a group of Apple salespeople, he created a dramatic story around it. "IBM wants it all," he said. Apple would be the only company to stand in its way. It was very dramatic and the crowd went nuts.

Branding expert, Martin Lindstrom, has said that great brands and religions have something in common: the idea of vanquishing a shared enemy. Creating a villain allows the audience to rally around the hero — you, your ideas and your product.

Stick to the rule of three. The human brain can only absorb three or four "chunks" of information at any one time. Neuroscientists are finding that if you give your listeners too many pieces of information to retain, they won't remember a thing. It's uncanny, but every Steve Jobs presentation is divided into three parts.

On September 9, 2009, when Jobs returned to the world stage after a medical leave of absence, he told the audience that he had three things to discuss: iPhone, iTunes and iPods. Jobs even has fun with the rule of three. In January, 2007, he told the audience he had "three revolutionary" products to introduce — an iPod, a phone and an Internet communicator. After repeating the list several times he said, "Are you getting it? These are not three separate devices. They are one device and we are calling it iPhone!"

Strive for simplicity. Apple chief design architect, Jonathan Ive, said Apple's products are easy to use because of the elimination of clutter. The same philosophy applies to Apple's marketing and sales material.

For example, there are forty words on the average PowerPoint slide. It's difficult to find ten words in one dozen Apple slides. Most of Steve Jobs' slides are visuals — photographs or images. When are there words, they are astonishingly sparse. For example, in January, 2008, Jobs was delivering his Macworld keynote and began the presentation by thanking his customers for making 2007 a successful year for Apple. The slide behind Jobs simply read "Thank you." Steve Jobs tells the Apple story. The slides compliment the story.

Reveal a "Holy Smokes" moment. People will forget what you said, what you did, but they will never forget how you made them feel. There's always one moment in a Steve Jobs presentation that is the water cooler moment, the one part of the presentation that everyone will be talking about. These show stoppers are completely scripted ahead of time.

For example, when Jobs unveiled the MacBook Air, what do people remember? They recall that he removed the computer from an inter-office envelope. It's the one moment from Macworld 2008 that everyone who watched it — and those who read about — seem to recall. The image of a computer sliding in an envelope was immediately unveiled in Apple ads and on the Apple website. The water cooler moment had run according to plan.

Sell dreams, not products. Great leaders cultivate a sense of mission among their employees and customers. Steve Jobs' mission is to change the world, to put a "dent in the universe." According to Jobs, "Your work is going to fill a large part of your life and the only way to do great work is to love what you do."

True evangelists are driven by a messianic zeal to create new experiences. When he launched the iPod in 2001, Jobs said, "In our own small way we're going to make the world a better place." Where most people see the iPod as a music player, Jobs sees it as tool to enrich people's lives. It's important to have great products, of course, but passion, enthusiasm and emotion will set you apart.

Carmine Gallo is the author of The Presentation Secrets of Steve Jobs: How to Be Insanely Great in Front of Any Audience, (click here to buy the book) is a presentation, media-training, and communication-skills coach for the world's most admired brands. He is an author and columnist for Businessweek.com and and a keynote speaker and seminar leader who has appeared on CNBC, NBC, CBS, MSNBC.com, BNET, RedBook, Forbes.com, and in the New York Times, the Wall Street Journal and Investor's Business Daily, as well as many other media outlets.

Note:  In keeping with the new FCC regulations, you should know that I received a copy of Gallo's book to review and if you click on the link to purchase the book, I will make a few cents from Amazon.  You might also be interested in knowing that I am left handed.