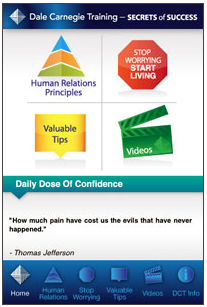 There are some books that I believe everyone should read.  No matter what your calling in life, no matter your age, maturity or how smart you are.

Dale Carnegie's classic, How to Win Friends and Influence People was written in 1936 and is still one of those books everyone should have on their shelf for quick and regular reference.  Now that's longevity!

Thanks to web 2.0, you can also now carry Dale in your pocket.

The brand new iPhone/Touch app called Dale Carnegie's Secrets of Success was just released.  I dropped the 99 cents and downloaded it.  (Blackberry and I suspect Droid are coming soon as well.)

There's lots of quick tips and reminders layered throughout the app.

Everything from golden oldies like…the sweetest word in the English language is the sound of a person's own name to the suggestion that true leaders give their people a fine reputation to live up to.

The content is very bite-sized so it's perfect for quick consumption.  There are also 30 or so videos built into the app.  I wish they would have spent a bit more time and money on the aesthetics of these.  But, don't let that deter you from downloading the app.  It's still well worth it.

To celebrate the launch of the app, I've been given 10 copies of the book to give away.

Here's how we're going to determine the 10 lucky winners!

In the comments section — leave a comment telling us about someone you know that has incredible and impressive influence.  Then, tell us how/why you think they possess that influence.

For example, I might tell you about my friend Steve who has earned his influence by simply being rock solid.  People know they can depend on him and he always honors his word.  He isn't flashy or showy.  He just is 110% consistent and through that — he has earned the trust of many people.

We'll randomly select 10 of the respondents to win the book.  So tell us about someone who's ability to win friends and influence people has caught your eye.  And give the new app a try!

10 comments on “Dale Carnegie’s advice about influence is very Life 2.0”