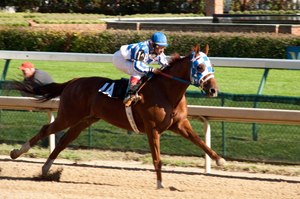 This post is a result of a perfect storm of events.

Stay with me through the personal parts — I promise, there is a message for you in this post.

Let’s start with the movie.  Secretariat isn’t just about a horse.  It’s about leadership, it’s about life and it’s about whether or not you choose to go all in.   These are topics that have been on my mind a great deal lately — because of all three events I mentioned.

There’s a scene early in the movie when Secretariat’s owner, Penny Chenery is at the brink of total financial disaster.  She believes Secretariat is something special but if she’s wrong, she places her entire family in ruins.  She comes up with a creative solution but the risks (she has to guarantee that the horse will win the Triple Crown, which hadn’t been done in about 25 years) are staggering.

Here’s what she says in her personal moment of truth.  “We will win if we can and live with it if we can’t, but you never know how far you can go unless you run.  You have to run your race.  I don’t care how many times they say it can’t be done. I will not live the rest of my life in regret and no matter what happens, we are going to live rejoicing every day.”

Penny Chenery chose to go all in.  Because it was the only way she knew how to do it.  Secretariat went on to win the Triple Crown and in fact, he broke records at each of the three tracks and won his final race by an astonishing 31 lengths.  Today, he is still regarded as the greatest racehorse of all time.  All because Penny Chenery had the courage to run her race and let him run his.

I imagine that Penny Chenery spent many nights staring into the dark night, unable to sleep and wondering what the hell she was doing.  That’s the reality of owning a business and, truth be told, of just being a human being that no one really talks about.

There are plenty of great aspects to both but it can be lonely.  And it can be scary.  Usually, there’s no one out on that limb but you.  And sometimes, in the quiet of the night, when no one is looking — you close your eyes and wonder “what the hell am I doing?”

Those doubting questions come faster and louder when you’re weary or feeling like the next hill might be the one that’s just too high to climb.  It would be so easy to just stop climbing.  Maybe even sit and rest awhile.  But then you’ll never know.

I’ve always been an all in sort of guy.  It’s the only way I know how to do it.  The hills before me will level out over time.  They always do.  I just have to be patient enough and have enough faith to keep climbing.  It won’t always be difficult.

One of the hills that has been a pleasure to climb is that I’ve spent the last two weeks literally watching my daughter Kelsey grow up before my eyes as I scanned photos, editing videos and prepared all the fixings for her graduation.  I’ve re-lived her moments of triumph like when her class voted to give her the school’s most coveted award and her personal defeats when things didn’t go the way she/we wanted them to.  Her four year old giggles still tickle my soul and the sum total of who she has become fills my heart.

In those videos and photos, she lived out her dreams of the moment — whether that meant dancing with Minnie Mouse in a parade or performing at the Iowa High School Speech Association‘s All State event.   One of the things I have always admired about Kelsey is that she goes for it.  It doesn’t matter the odds or the challenge — if it matters to her, she takes the risk.  She’s much more brave than I ever was at her age.

Maybe she already knows what it’s taken me 40 some years and a movie about a racehorse to be able to articulate.

That’s my hope for her this graduation weekend.  That she never forgets to run her race.  That she will not  live any bit of her life in regret and no matter what happens, that she lives rejoicing every day.  Because I know how far she can go.

I think it’s so easy to let life weigh you down or pile obstacles in your path.  Are you doing something that matters enough to you that you need to go all in?  Are you running your race?  Have you let yourself get stuck in a rut personally or professionally that is holding you back?   Have fear or doubts crept in and tied you down?

I don’t claim to have all the answers.  Heck…I just told you, I want to sit down and rest right now too.  But, here’s what I prescribe for both of us.

Watch the movie. In the final scene, Secretariat takes the lead at the Belmont and never looks back.  I can’t watch it without tearing up.  It is the ultimate visualization of living your life to its finest moment — this remarkable creature was doing what he was meant to do better than anyone else.  That horse wasn’t going to let anything or anyone stand in his way — he was so alive and so full of rejoicing that he flew.

If you’ve opted to sit down and rest — get up.  Get up and find what matters enough.

Run your race.  Find out just how far you can go.

38 comments on “Run your race”