Wondering where people are expending their efforts (and money) when it comes to digital marketing?

Take a look at this chart — it’s pretty telling. (This chart is part of the 2012 edition of The SoDA Report, from the Society of Digital Agencies.  More on the SoDa Report here.) 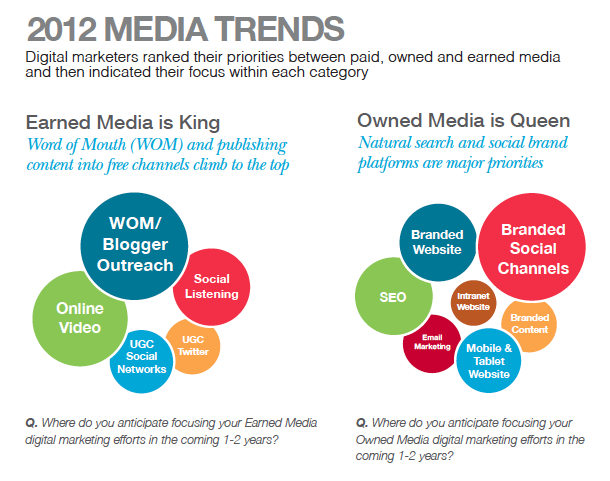 As you can see, when marketing decision makers were asked (in the where they were going to focus their attention, in terms of earned and owned media — they had some very definite opinions, with Word of Mouth and Blogger Outreach topping the charts.

Those surveyed said that they were continuing to shift their spending from traditional, expensive tactics toward digital—especially earned media —though it’s rarely a one-to-one exchange. According to the SoDA Report, a dollar or euro lost from TV and print budgets becomes 20 cents of digital.

While only 22% of client marketers are forecasting increases in traditional media spends in 2012, 50% projected an increase in paid digital media and two thirds say they expect to increase earned digital media efforts this year.

How do their answers align with what you’re doing at your place?

21 comments on “Where are digital marketing dollars being spent?”