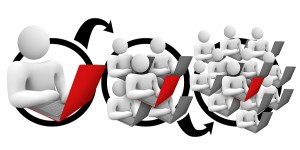 It seems like one of the goals I hear more and more is… “and we want it to go viral.”  I translate that to mean — we want a lot of people to see it.

But rarely when someone says they want something to go viral, do they really understand the implications of that.  The biggest one is — the minute it begins to go viral, it begins to take on a life of its own and it is beyond your control.

Let me give you a very tangible example.  My daughter and several of her college friends decided that they wanted to jump into the Sh*t People Say meme that was started in December (the original video has over 16 million hits – click here to view it) and make a video based on what University of Northern Iowa students say.

Their intention was pretty straight forward and college kid appropriate — they thought it would be funny. (And it is).  So they scripted and shot the video with that intent.  It’s filled with inside jokes about the names of resident halls (Dancer, Bender, Rider so you can imagine the joke!) and some of the art that lives on campus. And the first 50 viewers or so, mostly their friends or people within their circle of friends, were of the same mindset.  They got a lot of “LOL” type comments.

But then as the video began to spiral outside their own circle and go viral, some interesting things happened that we all need to keep in mind as we cross our fingers for a viral spread of our marketing efforts.

Not everyone is going to like it.  Some people took the humor as putting down the college they loved and took offense.  And there were a couple swear words sprinkled throughout which a few people objected to.  No matter how clear your intent or how pure your motives — as your audience widens, so will the range of opinions.

People will apply it to their own agenda. Like most Universities, UNI was not without some controversy this year.  Budget cuts are leading to dropping some majors which routinely only graduated a few kids a year.  Professors and special interest groups started sharing the video as proof “that the kids are upset that classes are being cut.”

Know that we all view things through our own perception/lens.  And nuance and meaning can be inferred or transfered if the motivation or inspiration is strong enough.  Sometimes that will work for you and other times, it might take you off course.

People will nitpick at it, because they would have done it different.  Apparently UNI is a very windy campus and one of the bits referenced that inside joke.  A commenter pointed out that they should have shot it in a different location which is the windiest of the windy spots.

One of the truths that has become apparent via social networks is that everyone has an opinion.  And now, they have multiple ways of sharing it. Some will applaud your efforts, others will take the opportunity to critique.  You can’t put yourself out there if you aren’t ready to accept both.

The lessons learned by the UNI students is a very valid one for all of us that create content and toss it out into the social wind — hoping it will grab an updraft.

There’s the trade off.  If your efforts goes big (their UNI video has over 5,600 views as of this posting) it will also go places you never imagined or intended it would go.  Is that bad?  No, of course not.  The goal is exposure.

But you need to be ready for the tangents, the crazies and unintended consequences because those are part of the package too. If your brand is strong and consistent, most people will dismiss the fringe comments and see what you were trying to say.

The fear that comes with the potential loss of control is why so many brands do social media badly or not at all.  You have to be willing to let go and trust your audience.

Hmm, there’s an interesting twist.  We want them to trust us with their money but are we ready to trust them with our message?

(Hat tip to my daughter and her fellow students for their creativity and willingness to see what happens.  A special nod to freshman Linh Ta (Electronic media major) for a great job shooting and editing the video. Want to read her thoughts on studying journalism in today’s world? Check out her blog.)