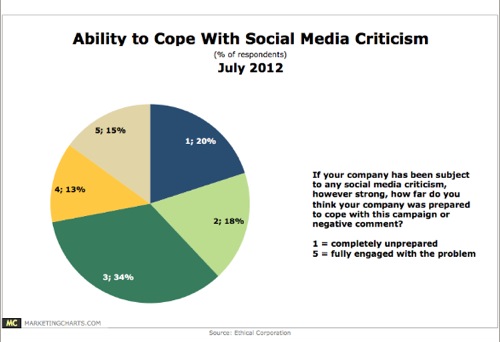 A vast majority of CEOs agree that a company’s corporate reputation is more important today than it was five years ago. New technology and social networks are reshaping the landscape of how society convenes and campaigns on critical issues.

So you would expect those CEOs would be mindful of the importance of being ready for an unexpected problem online.  But a recent study shows that 72% of companies that have been subject to social media criticism however strong (ranging from a single complaint to a full-scale campaign) rated their preparedness as average or below, with 20% being completely unprepared, according to a July 2012 report by Ethical Corporation and Useful Social Media. Just 15% of companies reported that they were fully engaged with the problem.

What should those CEOs being doing to ready their companies?

Bottom line — prepare, adapt, respond and take ownership.  Don’t be like the 72% who talk a good game but aren’t ready to respond in the heat of the moment.

5 comments on “Is your company ready for social media criticism?”