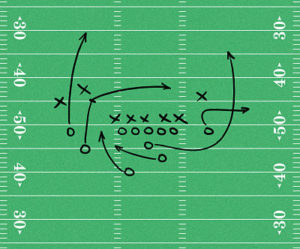 We’re a few days away from July and that means the first half of the game is over. It’s halftime.  Are you heading into the locker room to slap everyone on the back and tell them to protect your lead or are you about to give a hell and brimstone speech about digging deep and finding more?

We don’t usually think of business in these terms but just like halftime is a critical element in a football game, we can choose to make this halfway point equally important to our 2016 business outcomes.

One of the reasons why the halftime speech works is because they only have 12 minutes. That’s how long a regulation halftime lasts. There’s no wiggle room or opportunity for a bullet pointed list of topics. Twelve minutes means you need to get to the point and you only get one point.

I think that’s where we get into trouble, don’t you?

By now, your marketing plan (if you ever wrote one) has been blown out of the water by distractions, delays, or determined opponents. Or more likely – all three.

If you aren’t thrilled with the score at this halfway point in the year – I’d be willing to bet that you’ve allowed the distractions, delays and determined opponents get in the way. You stopped playing your own game.

It’s time to get back to that singular focus on the 12-minute halftime speech. Here are some questions to ask yourself as you prep.

How far behind are you? What are the tangible costs/losses?

You have to start by re-assessing your situation and being realistic about what you’ve sacrificed. It also can be very motivating. You can’t make up sales any better than you can make up sleep. You can do better – but it doesn’t go back and replace what was lost.

Are your original goals still viable or do you need to set a new goal?

You can’t win every game. But that doesn’t mean you can’t gain something from it and still call it a win. It’s like the football team that is losing by 30 or 40 points so they start rotating in their second string to give them playing time. That means the game can still provide value. You’ll waste the whole year if you keep chasing a goal that’s no longer viable.

What have you learned about the field of play and do you need to change your game plan?

You may have spent months putting together your game plan but it was based on assumptions. Now, six months into the game, you have plenty of real data and experiences to draw from. Now is the time to adjust based on your game day observations and the pace and tenor of the game so far.

What do you need to neutralize to win?

It might be a consumer perception, it could be that you are trying to do too many things so none of them are being done as well as you need, it might be your pricing structure or your financing model. But something has prevented you from being as successful as you wanted to be at this point in the year. If you don’t neutralize it – the second half will play out pretty much how this first half did. Now it’s time to sum all of that up into a single message. If you can’t describe it and get everyone fired up in 12 minutes or less – you’ve made it too complicated. What’s the new win? What’s in the way? How will you change the playing field to your advantage? What’s in it for the organization if you win? How will you keep score?

It’s time to get out there and make the rest of 2016 an exciting game!