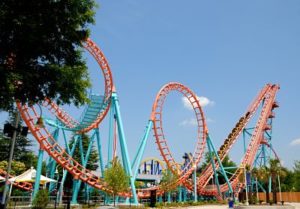 There’s a ride at Walt Disney World called Rock n’ Roller Coaster. At the very beginning of the ride, the car you ride in goes from a dead stop to over 60 mph in less than three seconds. What a rush! While that’s enough to get anyone’s heart racing, the folks at Disney don’t leave anything to chance. The riders’ hearts are racing long before they hear the sound effect of tires screeching or the car starts moving.

Disney is a master at the art of building anticipation. You load into the car and they bring you right to the brink of the ride’s start. The music starts to get louder and louder. The signage is warning you to keep your head firmly against the headrest. Right about the time you begin to wonder what’s taking so long, the neon sign above you and the speakers in your headrest start the countdown. The car starts to vibrate as the engines rev and then, with a loud screech of the tires, you are accelerating to 60 mph and an upside down loop as the ride begins.

My point is – they could have just loaded their guests in the car and after a second or two started the ride. The roller coaster would still be pretty thrilling but it wouldn’t be the same experience.

Whether you’re a roller coaster junkie or you’re scared senseless and peer pressure got you on the ride – the build up is incredibly effective. By the time the ride begins, you’re about to crawl out of your skin you’re so ready to just get started.

It’s not just that ride either. Disney uses this technique over and over to create an increased hunger for their rides, movies, and special events. They use it because it works. It creates demand. It’s increases perceived value. And ultimately, it increases sales.

I think we can all learn a little from Disney’s example. Many businesses rush to the sale and in that effort; spook their potential buyer because they’re either not interested or just not ready to buy.

But make someone wait or tell them you have a limited number of whatever they want – and suddenly they’re the ones asking for the sale. So how can we slow down to help the sales heat up?

Create some buzz: One of the best ways to build anticipation is to get other people to start talking about you. A concerted PR effort is a great way to get some media coverage or viral attention. When you can trigger positive word of mouth, you can count on increased interest.

Give your best prospects a sneak peek: Everyone likes to feel like an insider that has access or information that everyone else doesn’t have. Creating an opportunity for a select few to do a test drive but not have full access to the offer will generate anticipation for the actual release. Apple employs this technique better than just about anyone.

Don’t blurt out everything all at once: This is a mistake most marketers make. They’re in such a rush to pack every possible bit of information into every communication that they not only kill any possibility of anticipation but they also bury the audience with too much too soon.

Keep it a secret: The world loves a good mystery. One great way to create a mystique around your product/service is to tease the market and hold some information back. The more mysterious you are, the hungrier they’ll be to know.

At the end of the day, you don’t sell anything until someone wants it. Companies like Disney and Apple are great examples of how well using anticipation to stimulate that want is a great marketing technique that drives sales. It might be worth a try!