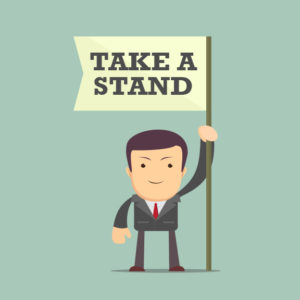 The Supreme Court’s decision to legalize same-sex marriage dominated the news, social media and most conversations when it was announced.  Regardless of where you stood on the topic – you couldn’t help but be immersed in it.  And that wasn’t true for just individuals but, interestingly, for businesses as well. Many of them made a point to take a stand on this issue.

There used to be an unwritten rule that businesses stayed out of political and social discussions.  Unless the issue was one that united the entire country, like World War II – businesses kept their heads down and just stayed focused on business.

But times have changed and consumers have made it clear that they want to do business with organizations that share their values.  It’s as though a third element has been added to the buying decision.  Consumers are driven by their emotions when it comes to any purchase.  That emotion is often tempered or inflamed by facts or features. But today, those two buying elements are influenced by the world around us. Consumer’s beliefs and values are having a bigger and bigger impact on how they perceive and interact with brands.

In the past, we’ve seen lots of brands embrace causes that are tied to their product/service like Avon’s fight against breast cancer or Dawn’s support of wildlife affected by oil spills and other disasters.  But all of that seems pretty safe in comparison to taking a stand on a controversial issue.

In recent history, we saw both Chick-fil-A and Hobby Lobby take a strong stance on social issues and that decision both cost them and earned them customers who were either aligned or repelled by their position.  In some ways, it’s the essence of branding – show your heart and attract your sweet spot customers who believe as you believe and will value you even more because of that connection.

Many brands spoke out when the Supreme Court decision on same-sex marriage came out. They quickly reacted to the decision and came out to show their support of the ruling within hours of the announcement being made.

There are a myriad of marketing lessons to be taken from that decision and the responses to that huge societal event.

Your company has a heart: Only you/your leadership team can decide if you want to take a stand and on what issue.  But recognize that whether you speak out or not – there are issues that matter to you and your organization. You’ll have to decide if that should be a part of your company’s public persona or not. The risks are real but so are the rewards of attracting and connecting with people who share your values.

It can’t just be for show: If you’re going to step out of the shadows and express an opinion on a social or societal issue – you need to truly own it.  These are vital topics to your audience and any sign of you being in the fight just for appearances or financial gain will bite you in a big way.

A mile wide versus an inch deep: You can’t fight every fight. And odds are, you don’t have a strong conviction for every fight. You also don’t want to be perceived as a brand that just runs from cause to cause, trying to capitalize on them all.  These kinds of issues are typically very complicated and take a long time to resolve.  If you truly want to affect change (otherwise, don’t get into the fight), know you’re in it for the long haul.

Bottom line – it’s your call. But if you’re going to take a stand, remember that you need to be smart about which issues should earn your resources and your reputation.

One comment on “Do you want to take a stand?”