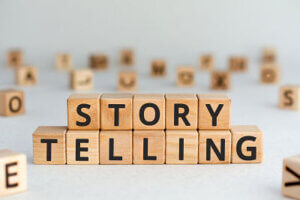 As marketers, we are continually being told that we should tell stories. But what exactly does that mean?

It’s recommended that we use one of the 14 character archetypes (the rebel, the outsider, the warrior, etc.) so the audience can relate to us. Then, we should make the customer the hero. And of course, we should follow one of the seven story frameworks (the quest, the rebirth, etc.) to build our stories, so they feel like a book or movie.

But even if we do all of that, is the audience going to care about a story featuring our product or service? If that were the case, wouldn’t most TV shows be about diapers or SUVs?

Let’s go back to our advertising roots and look at how storytelling and marketing first got blended together. Benton & Bowles was an agency based in New York that was launched in 1929 by William Benton and Chester Bowles. One of their largest clients at the time was Procter and Gamble. In a world we would struggle to understand, their challenge was that they didn’t have a channel that would allow them to reach enough of their target audience – homemakers.

Their solution was brilliant. There was no channel that attracted their core audience, so they created one.

They invented the radio soap opera so they could create sponsorships and ad placements for P&G and their other clients who wanted to target homemakers with their message. By 1936, they were responsible for three of the four most popular radio shows on the air, including “As the World Turns.”

When television arrived, Benton & Bowles replicated their radio success and launched a TV version of their most popular show, “As the World Turns,” in 1956 specifically for their client Procter & Gamble.

P&G sponsored or advertised on that show until it was canceled in 2010. Somewhere along the way, the network bought the show from Benton & Bowles, but they negotiated P&G’s exclusivity as part of the deal.

Red Bull is a modern version of the Benton & Bowles philosophy of creating media channels and telling stories that their audience wants to hear.

They didn’t buy ads or tell stories about their energy drink. They dug in deep and tried to learn all they could about their target audience, 18- to 35-year-old males. They started just hanging around them at college parties, coffee shops, libraries, and bars, paying attention to the conversations, passions, and worries of their audience. They handed out samples and listened.

From there, they started sponsoring events that appealed to that same audience. Concerts and extreme sporting events were high on their list, but even that wasn’t enough. They decided they wanted to own the channel to elevate their ability to tell stories. They created their own magazine, the Red Bulletin, in 2005.

They cover sports, culture, music, nightlife, entrepreneurship, and lifestyle stories. The focus is on people 18-35 who accomplish extraordinary achievements, move beyond the norm, test their limits, and passionately seek adventures while breaking new ground.

If you ever flip through their magazine, you’ll notice there is minimal mention of the product. Their Instagram account has over 13 million followers, and every photo is an extreme sports moment (with a lot of athletes wearing Red Bull logo apparel!).

In your head, I suspect you’re saying, “Yeah, but they’re Red Bull. That wouldn’t work for us because we sell X.” Think this strategy won’t work for B2B? Next time, I’ll show you a remarkable example of just how well it is working.

From there, we’re going to talk about how you can begin to tell your story in a way that attracts your ideal audience, holds their attention, and creates customer loyalty.