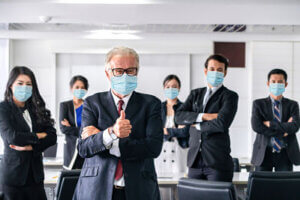 If there has ever been a year when our confidence has taken a knock to the chin, it’s 2020. If you are like most marketers, January and February gave every indication that 2020 was going to be a breakout year for you.

Many businesses reported the most robust January they’d had in a decade and were looking to exceed goals. And then COVID hit. Many of us went two to three months feeling that it was inappropriate to sell at all, and when we did sell, it was a bit apologetically.

As if that weren’t enough, the combination of COVID, racial tensions, economic challenges, back-to-school maybes, and just feeling like we are being restricted and contained at every turn has caused an underlying malaise in just about every human I know.

Given everything we’re all carrying on our shoulders right now, how in the world do we muster up the confidence to sell?

Marketing and sales are all about confidence. When you believe in what you’re selling, know it is the right answer for the prospect, and can see the benefits the prospect could enjoy, it’s much easier to approach a new opportunity and offer your assistance.

That’s where I think we can regain our confidence: by recognizing that we have something valuable to offer and by seeing it as us offering assistance. Your marketing should be helpful and useful, which builds trust. Once the trust is seeded, sales is about continuing the trust-building while offering tailored solutions that are going to exceed expectations.

Barbara Corcoran, from ABC’s “Shark Tank,” recently shared a letter that she wrote to the show’s producer, Mark Burnett. It’s clear from the letter that she had received a “thanks, but no thanks” response to her audition and I’m sure Mark expected her just to exit gracefully.

Instead, she sent him this letter, outlining very respectfully why this was not the right decision. Her arguments were not about her but how he was taking a more significant risk by not allowing her to come to LA for the final tryout, even though her rival for the position would be there as well.

She called Burnett’s rejection a lucky charm and then gave him point-by-point suggestions of how his final decision would be more reliable if he reconsidered her for a role on the show.

The entire letter exudes confidence. There’s nothing arrogant about it, but as she builds her case, you begin to understand what a formidable force she really is. She ends the letter acknowledging that it is his decision, but she’s already booked her flight and hopes he invites her to get on that plane.

As I studied the letter, I identified some of the sources of her confidence that we can all learn from as we rebuild our own:

She reflects on her past successes and sees them as a progression of her skills, accomplishments, and lessons learned.

She thinks about the opportunity from the buyer’s (Mark Burnett) perspective and demonstrates that he’s at risk of making a bad decision if he does not consider her in the mix.

She suggests ways he could improve his decision-making process, whether she is chosen or not.

She compliments him and recognizes his depth of expertise in his field.

She ends with the presumptive act of confidence (booking the flight).

Breaking that down, it’s about having faith in yourself and what you sell. It’s about truly understanding what your potential buyer is trying to accomplish and his or her situation and being helpful in their efforts, and it’s about a confident close, knowing you can make a difference.