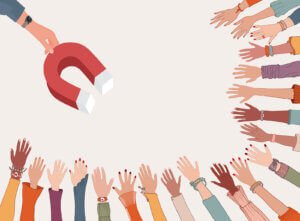 In last week’s column, we identified the difference between a celebrity influencer and someone who has influence with the audience you care about. This is the marketing equivalent of having a very connected and highly respected person write you a letter of recommendation for a coveted job. They’re not celebrity family or even internet famous, but a good word from them can make you a top contender for the job.

Sure, you still have to be qualified and earn the opportunity. But that letter of recommendation gives you a significant edge over everyone else. It’s someone’s endorsement of you — and to a group of people who know, like, and respect your endorser, that is gold.

In many ways, that is what makes micro-influencers more effective than their celebrity counterparts.

When you follow someone who isn’t Jennifer Garner-level famous and interact with them on social media or attend an event where they’re present, you come to feel as if you actually know them. Many authors, podcasters, researchers, subject matter experts, etc. enjoy that level of intimacy with an audience that values what they have to say or what they create.

These influential people actually build a community of fans and followers. Suppose you can find someone who has gathered the same type of people that matters to your brand. In that case, there’s a significant opportunity for you to borrow from the esteem and respect that already exists among the community members.

There’s incredible power when you can become part of an existing community and earn the community leader’s endorsement who has already proved him/herself to everyone else.

So how do you find one of these very targeted micro-influencers?

Online tools: There are online tools like BuzzSumo.com and Followerwonk.com that have search tools to help you identify blogging or social media micro-influencers by topic. There is no end to these tools, so pick two or three and see who shows up on multiple platforms.

Conferences and trade shows: Pay attention to the speaker lineup and don’t just focus on the keynotes. Breakout and roundtable-level speakers may be exactly what you’re looking for in a partner.

Authors and podcasters: This is a treasure trove of potential. Not only will their book or podcast declare their subject matter expertise, but odds are they’ve been building a following for a while and are used to promoting their own show or book.

Social channels: Who do you follow? Depending on what your company sells, it might just be an enthusiastic amateur who talks to your kind of people.

Use hashtags to ferret them out: Make a list of 10 keywords that drive traffic to your website. Identify a handful of hashtags that play off of or support that keyword list. Look for frequent posters who regularly use those hashtags.

Once you’ve built a potential list of partners, you need to start following them. Listen to their podcast. Read their book. Connect with them on social channels. Pay attention to the content they create and share. Do you agree with it? Did you learn something? How do they interact with commenters? What signs do you see that they’re actively building a community?

After you’ve narrowed down your list, you still need to approach them to see if they’d be interested in partnering with your brand. Ideally, you want someone to partner with you for more than the money. The best influencers only endorse the products, services and brands they genuinely believe in.

In next week’s column, we’ll talk about what that approach looks like and how to increase the odds of a mutually beneficial long-term partnership. It may not be as complicated or as expensive as you think.