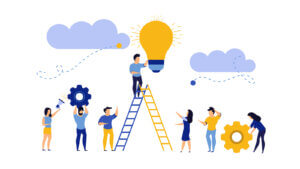 As I mentioned in last week’s column, I will spend the next few columns digging into seven principles that I’ve identified as vital to Walt Disney’s success as he built one of the world’s most iconic and profitable brands.

Here are the seven beliefs/habits that I believe led to Disney’s success:

This week let’s talk about having a vision that is so clear and well-articulated that someone else can complete it on your behalf.

Walt Disney died in December 1965. The groundbreaking for Walt Disney World was May 30, 1967. At the ribbon-cutting in 1971, a reporter remarked to Walt’s brother Roy that it was too bad Walt wasn’t there to see it. Roy replied, “If Walt hadn’t seen it, we wouldn’t be here.”

Walt used several tools to bring his vision to life that all of us can emulate.

Storytelling: Walt didn’t just talk; he wove a story. He used vivid detail about every new undertaking. He described the project, how it was going to be done, the players involved, and how the audience would react. He painted a 3D picture in everyone’s mind.

War room/wall: Walt had a secret lair where he would paper the walls with mind maps, scraps of color, visuals and timetables. He’d invite key people into his war room, where they would be immersed in the project’s nuances.

Theme or catchphrase: Walt believed in boiling any project’s essence down to a single sentence or theme. This single sentence would serve as a touchstone for the work. As decisions were being made, the team members could ask themselves if what they were about to do would get the project closer to honoring the underlying theme or core message.

Focus on who and why: Walt never let the team lose sight of the audience for any work they did. The work was done in service to that audience. There was a greater purpose in terms of how the project would affect them. Would it inspire children to dream big? Would it allow adults to be kids again? Would it continue a legacy and introduce it to a new generation?

The result of deploying these strategies was that Walt Disney World was the embodiment of Walt’s vision, even though he was gone long before the groundbreaking.

Sharing your vision is not just an intelligent leadership trait, it’s going to give your marketing a boost as well.

You can see how following these habits could fine-tune your marketing efforts around this project. The story of how/why the product or service was created will be rich with language you can weave into your ads and product descriptions.

The war room walls might help with the mood and tone of your marketing.

The theme or catchphrase would provide direction and messaging hierarchy for landing pages, product materials or headlines. Just like it did for the team creating the product or service, it can serve as your true north too.

The who and why will give your marketing team everything they need from an audience perspective. Who is going to care about your offering, and why is it important to them?

A shared vision that is vibrant, 3D and very tangible means that everyone can march it out together.