Consumers pay attention to where your ads live and who their neighbors are! 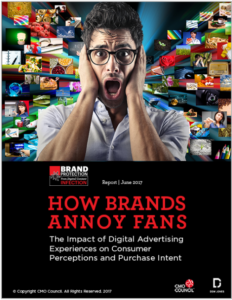 The Chief Marketing Officer (CMO) Council came out with a new study that we all need to be aware of as we place our digital ad buys.

Nearly half of all consumers indicate they would rethink purchasing from brands or would boycott products if they encountered brand ads alongside digital content that offends them, reveals a new study on “How Brands Annoy Fans.”

Aimed at assessing the impact of digital advertising experiences on consumer perceptions and purchase intent, the research looked at digital brand safety from the consumer’s perspective and found that consumers are punishing even preferred brands if they don’t use trusted media platforms or take active steps to control the integrity of their ad environments.
Conducted by the Chief Marketing Officer (CMO) Council using the Pollfish platform, the survey gathered views from 2,000 adult consumers in North America and the U.K., both regions which have both seen high-profile brand campaigns withdrawn this year for their association with fake, distressing and hateful content. The consumer poll is part of a broader study of digital brand safety being conducted by the CMO Council, in partnership with Dow Jones, entitled “Brand Protection From Digital Content Infection.”

With trust more critical than ever, respondents made it clear that they will no longer give their brands a pass for even inadvertent display of ads near objectionable digital and video content. A full two-thirds of respondents said they would hold a dimmer view of brands that provided negative advertising experiences.

The report also found that social media platforms are still not trusted content spaces. Despite listing social media as the source of the second-highest volume of ad messages they receive—behind only television—consumers ranked social media last among their five most trusted channels. They ranked friends, TV, search engines and newspapers as more trusted sources.

A large majority of consumers said they responded differently to the same ad, depending on its context, with 63 percent saying they responded more positively to ads run in trusted media channels. Consumers are, in fact, turning to trusted content providers and media to escape objectionable content. Some 60 percent said offensive context has already caused them to consume more content from trusted, well-known news sources and established media channels.

“CMOs and brand advertisers are increasingly concerned about various aspects of digital and programmatic advertising, including concerns about their ads showing up next to offensive content,” said Donovan Neale-May, Executive Director of the CMO Council. “This consumer survey demonstrates that those concerns are well founded. Advertising placed next to objectionable content is damaging to a brand while ads that accompany more trusted content and media are more accepted.”

While other brand safety studies have explored adverse brand perceptions, the CMO Council research asked consumers about their response to the experience of finding brand ads in proximity to objectionable content or fake news sites—and their warning to advertisers was brutal. Some 37 percent of consumers said it would change the way they think of a brand when making a decision to buy. Another 11 percent said they would flat-out not do business with that brand. Another 9 percent said they would become vocal critics of the brand.

Another consumer response is the increased use of ad blockers. In another alarming finding for digital marketers, more than 50 percent of respondents said they either already had or planned to install some form of ad-blocking software to their mobile devices or PC browsers.

Negative experiences with digital display advertising are far from a rarity. According to the most recent “Media Quality Report” by Integral Ad Science (AIS), up to 8.6 percent of digital display ads in the U.S. were flagged as posing a moderate or high risk to brand reputation. Maria Pousa, CMO for IAS, told the CMO Council that the most prevalent categories of risk in the U.S. were violent, adult or offensive language content, followed by issues like hate speech and illegal downloads.

Other key insights from the CMO Council survey include:

Neale-May said the full report, featuring qualitative interviews and vendor insights, would include key details on the steps, tools and strategies adopted by leading advertisers and CMOs who have minimized the threat to their brands. The abbreviated consumer survey findings can be sourced from the CMO Council at https://www.cmocouncil.org/digitalad-consumer-report.

About the CMO Council

How do we connect with our audience? 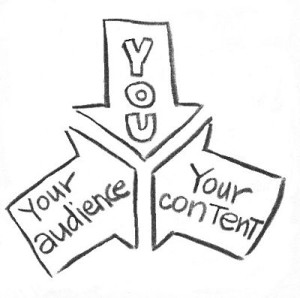 We talk about wanting to engage and connect with our audience but what does that actually mean?

Global marketers see the value of making their digital interactions with customers and stakeholders richer, more personal and predictive.

But most are still struggling to make their mobile, social and web channels work together to provide a more enriching and engaging experience.

A new study from the Chief Marketing Officer (CMO) Council—entitled “Brand Attraction from Enriched Interaction”—reveals marketers still lag in creating multi-channel, digital marketing campaigns that reach and resonate with diverse, micro-audiences worldwide. Only 19% said they are extremely good or very good in this area. In contrast, 45% gave themselves a lackluster grade , saying “in terms of connecting with our audience with fully integrated mobile, web and social channels — we aren’t hitting the mark.” This compares to just 21% who said they were very proficient.

The latest study, sponsored by IBM Digital Experience, was designed to assess the degree to which marketers are embracing new digital channels and content management technologies to realize the full value of rich media engagement, crowd-sourced content, and mass-customized commerce through higher levels of personalization and tailored interaction.

“Digital marketers are challenged to create an end-to-end, multi-channel experience that engages and enlivens customer, partner and employee audiences with more compelling and relevant content-driven commerce and conversation,” noted Donovan Neale-May, Executive Director of the CMO Council, which has nearly 10,000 members in 110 countries. The council’s research was based on input from 287 marketing leaders across all regions of the world. A free strategic brief summarizing research findings and highlights is available for download from the CMO Council website.

“A critical area of insight from survey respondents centered on what technology transformations are most likely to impact how companies market, operate and connect with our customers.” Topping the list was the advent of the smarter digital enterprise, with its automation of marketing execution and customized interactions at scale. Next was the new API-driven economy, where partners and ecosystems share mobile/web links, information and insights to add value and further monetize transactions and interactions. Not far behind this is the disruptive potential of the “Internet of things” and the ability to gather real-time data and intelligence through pervasive, sensor-based tracking of behavior, intention and satisfaction.

Areas of exploration covered by the study included: