Is your business really different? 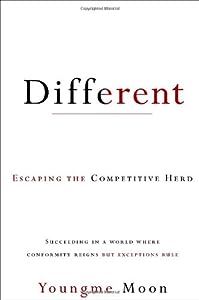 It may be the greatest of all business cliches — you have to differentiate yourself.  I’ve said it myself more than once.  While it is certainly true… many businesses struggle with how to bring the idea to life.

And even when a business believes they have achieved that level of uniqueness — their customers can’t see or describe the difference.

Many marketing books push you to be different but very few tell you how.

That’s what’s fascinating about Youngme Moon’s best selling book Different. (click here to buy it*) It was just released in paperback and I finally got around to reading it.

The book’s basic premise is that we humans subscribe to a herd mentality and tend to categorize everything into little boxes.  Which is originally unique is quickly copied and becomes the norm.

So, if that’s how we are wired — how do we ever truly stand out from our competition?

Reversal: The first way to be different is to use the “reversal” concept. Back when you hadn’t yet heard of Google, the online portal kingpin was Yahoo. Yahoo’s home page was crammed with news, stats, photos and links.

If you wanted to compete with them — you’d most likely be trying to fit even more features on your homepage, not less. That’s how things were done. But Google decided to look at it in a new way. They completely redesigned the search engine experience for billions around the world by having nothing on the home page but the search box.

They reversed the norm.

Breakaway: What breakaway brands do better than anybody else is leverage this fact by asking you to replace one mental model with another.

Kimberley-Clark created an entirely new marketplace by creating the “Pull-Up”. It’s a cross between underwear and a diaper. It’s still just a diaper put on a different way. But they completely remove the stigma of wearing diapers past the age two, and parents are now routinely keeping the kids in these “Pull-Ups” beyond the age of four.

Hostile: This method takes some courage.  It’s basically when a brand takes its most significant weakness and accents it.  A hostile brand  “doesn’t lay down the welcome mat, they lay down a gauntlet.”

It isn’t marketing, it’s anti-marketing. Mini is the perfect example of this. It took it’s biggest possible wart, and made it even bigger. All of its advertising seems to say “it’s even smaller than you think.” In one famous example of this type of branding executed flawlessly, Mini put one of its cars on top of an SUV and drove it around a busy downtown core for all to see. Where you were used to seeing a ski rack, you saw an entire car.

The book has plenty of examples to learn from and will definitely get you thinking about your organization in a new way.  It’s well worth the read.