What Josh Groban can teach us about marketing 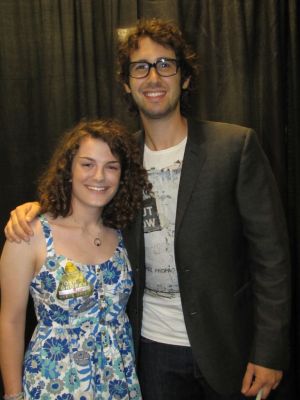 If you also follow me on Twitter or Facebook — odds are you know that I have an 18 year old daughter who loves Josh Groban and his music.

This past summer was all about Josh for the McLellans.  We saw his concert in 3 different states, culminating in front row seats, backstage passes (see the picture of my daughter and Josh) and him wearing a t-shirt that she gave him on stage during the encore.

I tell you all of this because as we’ve done our family Josh Groban deep dive, I couldn’t help but notice something:

Josh Groban is a brilliant marketer.

You may not like his music (seriously, what’s not to like?) but you can take emulate his marketing prowess, no matter what you sell.

He has build a solid marketing foundation: Josh has all the usual things you’d expect a singing sensation to have these days.  A robust website, an active fan club, lots of Josh Groban personalized items (Yes, we do have a pair of Josh Groban flip flops at our house), and plenty of ticket giveaways on radio stations etc.

Lesson for us: While the marketing foundation might not be sexy — it’s necessary.  You can’t start off in the middle.  Build a rock solid foundation and then grow from there.

He gives his best customers exclusive content/access: He gives fan club members exclusive access to front row seats.  He also offers $25 tickets for all students at every show, which is not advertising anywhere but on his fan page.

For every concert, he selects one local fan club member to be his “road reporter.”  That person gets back stage passes, a press pass (to sit with the media during the concert and have special photo taking opportunities) and gets to write a review of the concert — which is posted on Josh’s website.  As you can imagine…every road reporter includes the photo of themselves with Josh.  Do you think that drives some traffic to the page?

Lessons for us: Rewarding your best customers transforms them into fans.  Fans who brag and spread the word.   That’s marketing you can’t buy, but you sure can influence and encourage.

He uses social media to be a real human being, not a robot: His tweets are his own and often, not about his music or singing.  (One that amused me was when he was trying to imitate the sound of a train)   He hosts webinar/chats with his fan club members and he really does just hang out and talk with them.

He does some crazy stuff on YouTube like this cooking show video.  He also did a couple where he interviews himself.  He’s goofy.  Which makes him very real and very likable.

Lessons for us: I don’t care if you’re a huge brand like Nike or a local shopkeeper — people want you to be real.  They want to like you.  But they can’t do that if you hide behind corporate speak or “official statements.”

He shows his heart: Josh launched a foundation years ago, but really has sharpened the focus of it to raise money for arts organizations for kids.  It might be a youth symphony, buying instruments for a disadvantaged elementary school or a theatre camp.  At every concert, he talks about his Find Your Light Foundation, offers his fans a chance to text in a donation and introduces a group of kids from that local city who are benefiting from those donations.  It’s all very nicely handled.

Lessons for us: Your customers want to know that you stand for something.  And if you truly show them your heart, they’ll join you in the fight.  Look at what Avon has done for breast cancer.  That’s not the company doing it — it’s their loyal customers.  Who are even more loyal because they share a passion now.

Bottom line — if a 30+ year old singer can launch a marketing tsunami mostly through gile and technology — so can you.  What Josh reminds us is — if it’s real, people gravitate towards it.

Thanks for the lessons Josh…and for the summer that will live in Mclellan infamy!