Are you in the emotional transportation biz? 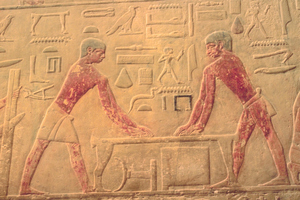 …We’ve always found a way to tell our stories

It’s no secret that I am an unabashed fan of storytelling.  It is how we learn when we’re school kids, it’s how we get our friends to do crazy things (“think of what a great story this will be to tell your kids, Steve!) and it’s how we persuade each other — be it to vote for a candidate, buy a particular brand of cologne or share our religious beliefs.

Look at how reality TV has captured that truth.  We come to cheer for perfect strangers who become important to us — because we know their story.

We are, by our very nature, storytellers AND story absorbers.

And yet…in our business communications, all too often, we blather on about facts, figures and bullet points rather than letting the stories connect us to people who are drawn to them.  Which is why I really want you to read Peter Guber‘s Tell to Win. (click here to buy*)

So the man knows the power of stories in both business and entertainment.

“Emotional transportation” is what Guber calls the power of story telling and he says “more and more, success is won by creating compelling stories that have the power to move partners, shareholders, customers, and employees to action. Simply put, if you can’t tell it, you can’t sell it.”

I can’t argue with that.

The book outlines techniques you can use to create purposeful stories like changing passive listeners into active participants and using “state of the heart” technology on and offline to keep your audience connected to your story.

At the end of each chapter, Guber calls out the aHHa! elements of that section.  Like many business books, he gives you a formula for creating better, more compelling stories and then gives you plenty of examples to draw from.

Even if you’re already telling stories left and right — there are some nuances to be learned from this book.  be sure you come back and tell us a story of how you used what you learned!

*Yup, an affiliate link.  The author sent me an advanced copy of this book to review.  So did a bunch of other authors.  But this book is worth sharing with you.