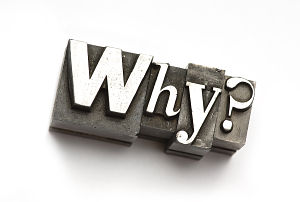 One of the 20 most watched TED talks of 2010 was given by Simon Sinek and speaks directly to anyone who is trying to market or sell something. Sinek’s premise is simple.

Always start with why.

Sinek began his adult life as a student of anthropology. His fascination with people led him to a career in advertising and he found himself combining his chosen work with his earlier studies to try and understand what motivated people.

All of that pondering led to his book Start With Why*, his focus on how leaders motivate companies and customers and his famous TED talk.

His findings are very applicable to us as we market our products and services.

In the vast majority of marketing today, the lion’s share of the language and imagery we use is self-focused. We talk about ourselves, our products, our services and our organizations. When we don’t think that is enough, we dissect even deeper, breaking down the facts into bullet pointed lists of features that detail and justify the claims we make.

It’s not that anything we are saying is inaccurate. In most cases, it’s spot on. But we are blathering on about facts and figures. That’s the what. We know that people buy base don emotions and justify that purchase with the facts…but all too often we just feed them the justification with first holding up the emotion.

We rarely get into the why of something.

The why of something inspires. It makes a consumer want to believe in you. It leads them to want to give your product a try. It makes them feel as though you’re on the same team.

I’ll give you an example. I never really paid much attention to which brand of dishwashing soap was on my sink. My theory was – they’re all pretty much the same so I’ll buy whichever is the cheapest. I’ve probably seen hundreds of commercials for dishwashing soap over the course of my adult life. But they all talked about how well they cleaned dishes. The facts. And it all sounded pretty much the same to me, so not one of them stuck in terms of brand loyalty or preference.

But when Dawn started showing the commercials of the oil spill rescue workers using donated Dawn to clean up the wildlife covered with oil – all of a sudden, we had a common why. We love animals.

Did you see what happened? It went from them and me to we. And now, when I go to buy dishwashing soap, I don’t think about getting clean dishes. I think about ducks covered with oil and how Dawn is going to make a donation if I buy their product.

All the other dish soaps are still talking to me about removing grease or their aromatherapy scents. They’re talking what. And they are talking to me. But Dawn talks about how we are going to protect and care for the world’s wildlife.

You don’t have to align yourself with a cause move from what to why. You just have to re-frame the way you think about and talk about what it is you market.

This gets back to a question we asked a few months ago. What do you really sell? If your answer is your product or service – you’re in trouble. Whether it’s insurance, a boat or a complicated piece of equipment – you’re a commodity. Someone else out there does (or will do) what you do.

Harley Davidson creating a community of bikers that rule the road, have plenty of attitude and join together at rallies, rides and for causes. People don’t buy their motorcycles. They buy being a part of the Harley community.

You need to find your why and own it.