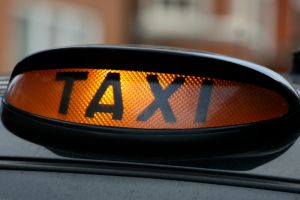 From on outset, I knew this was going to be a different sort of cab ride.  I walked out of the hotel and just like it has happened hundreds of times before…magically, the taxi appeared.

But from that moment on, it wasn’t a ride, it was an experience!

The bellman put my suitcase in the trunk as I got into the back seat.  The driver immediately turned around in his seat and extended his hand.  As we shook hands, he introduced himself and asked what kind of music I liked.

I told him to surprise me and he suggested some Carlos Santana because “you can’t help but feel joyful if you’re listening to Santana.”

As we headed towards the airport — my marketing lesson continued.  Jeff got a call (like cab drivers always do) but quickly told his wife he had to go because he was chatting with his new friend Drew.

He proudly pointed out to me that his taxi was a Lincoln Town Car and as I commented on how the leather glistened, he explained that he wipes down the interior a few times a day to keep it like new.

In the course of the conversation he gave me  his business card with his cell phone number on it.  He invited me to call and pre-schedule with him next time I was in St. Louis.  He told me that most of his fares were by referral or repeat business.  I’m not surprised.

When we got to the airport, he not only got my bag out of the trunk, but he carried it to the airport’s door.  We said goodbye with another handshake.

I bet it won’t surprise you that he received more than a healthy tip from me.  And I suspect that’s the case with most of his fares.

What are the takeaways from Professor Jeff?

People do business the people: It’s hard to imagine a less random choice than hailing a cab.  Whoever is first in line is who you choose.  But Jeff made sure he wasn’t some random cabbie to me.  He went out of his way to become a person — and a person I liked.  Next time I am headed to St. Louis, I will be calling Jeff.

It’s all about the customer: Jeff made me feel like he actually cared that I was in his cab.  He called me by my name.  He didn’t talk on his cell phone but instead, stayed engaged with me.  He invited me to partake in the music selection and we chatted for the entire 30 minute drive.

Appearances do matter: His cab was immaculate, inside and out.  He was dressed neatly and he had a warm and genuine smile on his face.  You honestly couldn’t help but enjoy doing business with him.

I’d bet that Jeff never took a single marketing course. (He was a cop for 25 years before becoming a cab driver) He probably doesn’t have a brand manual, a tagline or a company vision statement.

But he understood customer service better than many companies that have all three.

And if you’re ever headed to St. Louis, let me know.  I’ll hook you up with my buddy Jeff, so you can get some marketing schooling!