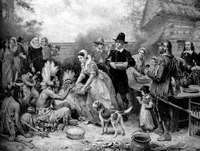 Here in the United States, we gather every November to give thanks.  Each year we sit at a table filled with turkey, dressing, pumpkin pie and of course, some post dinner football. Why?

Behold the power of persistence.

We all know the story of the pilgrims of 1621. But many don't know that while there was an occasional day of thanks after 1621, it typically happened in June and then would go many years before the next celebration. President Jefferson actually scoffed at the idea of a day of thanks.

We would be at work on that 4th Thursday in November and cranberry jelly free, if it were not for Sarah Josepha Hale, a magazine editor who wrote editorials, and letters to governors and presidents. Hale felt so strongly that our country should observe a day of thanks that she maintained her campaign for 40 years until in 1863 President Lincoln finally declared the last Thursday in November a national day of thanks.

Imagine if she had written just one editorial or letter and then given up.

And yet that's what marketers do every day. They try something once or twice and then throw in the towel. If you know you have a good idea – don't let fear, time or pressure wear you down. If you truly believe you are the right fit for a potential client…don't accept no.

Keep lobbying for a chance to tell the story. Even if it takes 40 years.

Keep banging into those walls

6 comments on “How much do you believe in your ideas?”