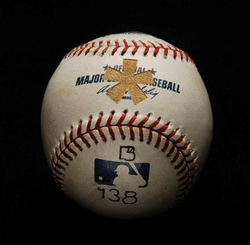 As a baseball fan, I watched with great dread as Barry Bonds approached Hank Aaron’s home run record.  For me, the two men couldn’t be more different.  Bonds surpassing Aaron’s record was sort of like when the villain gets one up on Batman.  They usually do it through deceit and trickery.

In my opinion, Barry got his spot in the record books the same way.

The historic baseball that was #756 was delivered to the Baseball Hall of Fame last week.  But it arrived with an asterisk.

As most of you know, fashion designer Marc Ecko purchased the ball in an online auction for $752,467 and then held an on-line poll to ask what should be done with it.  The choices were:

Almost 10 million people voted and almost half of all the votes went for brand it.  And so it was done.

The truth is, we’ll never know the truth.  But Bonds conducted himself in a way that we doubt his character.  Most of us don’t give him the benefit of the doubt and he will probably never be able to behave his way back to being respected and trusted.

Think about that sentence.  Probably never be able to behave his way back to being respected and trusted.  Yikes.

Why?  Because through his words and actions, he had built a brand that told us he was rude, conceited and didn’t care about the game as much as he did about his own creature comforts and fame.  And now, that brand is part of the reason behind the lion’s share of the country thinking that he lied when he said he hadn’t taken steroids.

Is it fair?  Probably not.  But life and branding aren’t fair.  As I said in a post from last year, once you don the black hat, it’s pretty tough to take it off.

You bet.  But he can’t.  He’s already wearing the black hat.

So why am I waxing on about this, you ask?  Because we could just as easily and just as accidentally create the same sort of brand trouble.

What small decisions, policies and behaviors are going on in your company that might add up to a brand you can’t behave out of?  Don’t be too quick or too smug to think there’s nothing you can’t improve on.  I’ll bet with a little thought (and input from your co-workers and clients) you could come up with 5-10 small things that aren’t giving off exactly the brand message you want to create.

You have time to fix it.  Before your marketplace puts an asterisk by your company’s name.

For more on marketing and asterisks, check out Patrick’s post over at Responsible Marketing.  I borrowed the above photo from him as well.