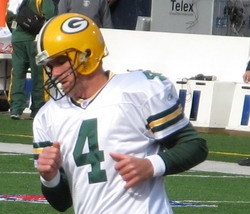 Unless you’ve been in a cave, by now you know that:

Now that’s the way to end a career and control the legacy of your brand.  If the story had stopped there…that is how Brett Favre would have been universally remembered.  Even people who dislike the Packers or Brett himself could not deny or really sully his greatness.

But…Brett messed with his own brand story.

Note:  I don’t know if Brett has more good games in him.  This post isn’t about the viability of his playing skills or if he retired too early.  It’s about being mindful of managing your brand.

Brett Favre retired at the end of last season.  His tearful press conference was the perfect end to the brand story about an ordinary guy who just loved the game.

But, for whatever reason, Brett couldn’t leave it alone.  He put the Packers in the unenviable position of having to be the villain and trade their legend to the Jets.  The Packer fans are angry that their team traded their hero, the Packers organization has to feel a whole lot less love towards him for making them the bad guy, Brett has to be secretly disappointed that his team didn’t want him back but has to put on the fake smile as he dons a Jets ball cap at the press conference and…the brand gets muddy.

Now, for a lot of fans…Brett has become the guy who couldn’t walk away.  Couldn’t be decisive about his own career.  Wasn’t a Packer to the end.  Sort of a sad story — the man who couldn’t quite step out of the spotlight.

I’m not saying it wasn’t his right to decide to come back.  I’m suggesting that he had, through his choices and actions, created the perfect brand story.

Until he didn’t anymore.

What do you think?  Will Brett’s choices change the way he’s remembered?  Will his brand now be marked with an asterisk?

Update: Rush Nigut adds his thoughts to this debate from a perspective that only a great business attorney could bring to the conversation.