Free mortgage… if you turn your house into a billboard 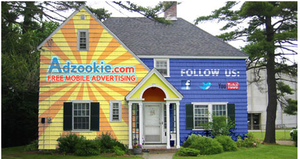 Thought this will amuse you on this Friday the 13th.  And for some of you, it might be a great solution to paying down that mortgage.

Want someone to pay your mortgage?  No problem.  Just let Adzookie give your home a paint job.  Adzookie says it will pay the house owner’s mortgage every month for as long as the home stays painted.

Adzookie publicly  launched the offer on its website Tuesday — and by late afternoon, the company had already received more than 1,000 applications, according to Adzookie CEO Romeo Mendoza.

Adzookie intends to paint its logo and social media icons onto participating homes. Houses must remain painted for at least three months, and the agreement may be extended up to one year.

Painting is expected to begin in a few weeks. The above photo, which is included on the program’s site, is a digital mockup. (No actual homes have yet been painted.)

The home billboard scheme could raise the company’s profile — but don’t expect too many homes to score the subsidized deal. Mendoza’s budget for the entire program is $100,000, and he expects to spend about $8,000 per house on the painting alone.

At the end of the agreement, Adzookie will paint the house back to its original colors. Leases and rentals aren’t allowed, nor are homes in cities with bylaws that would prohibit the bright painting.

This is an extension of the barn painting we midwesterners see as we traverse the countryside.

So… would you consider it?