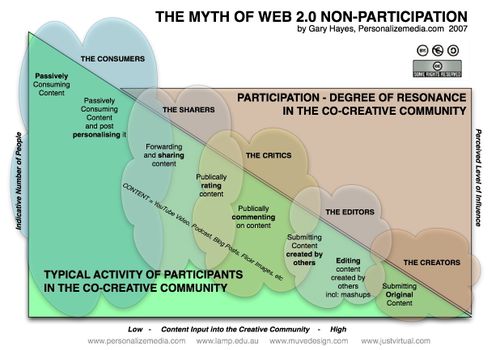 I know…blasphemy.  If you read the blogs and tweets of many social media proponents, they'll speak of social media like it is the holy grail.  Seek it…find it and all your marketing woes will be gone.

I don't think it's anywhere near that simple.

Don't get me wrong — I still believe in the value and power of social media.  But I also believe:

If you look at this great diagram by Gary Hayes you'll see that there are degrees of involvement that correlate with different activities.

The Consumer:  This is the person/company who actively listens to what is being said online about themselves, their company, their industry etc.  This, I believe is the level that ALL people/companies need to be at.  (check out this great post by Jason Falls about listening)

The Sharer:  This is where you go from reading it to sharing it.  Maybe you tweeting great reads or you have one of those blogs where you just list other blog posts worthy of reading.  You might also be an association or company leader who wants to create word of mouth or keep your team current.  (Word of mouth elevates you as well as what you share.)

The Critic:  I take exception with Haye's label on this one.  Yes, at this level of activity, you might be criticizing something, but I think in most cases you are reacting to something that's been said.  You are adding additional facts, correcting a misperception or asking a follow up question.  (If you're doing a good job at level one (The consumer) you'll be able to respond quickly.)

The Editor:  There's nothing that says you have to create all new content if you want to deep dive into social media.  You could create a site like MarketingProfs that has many authors creating and re-purposing content  or perhaps you belong to a group (like my agency networking group) and everyone writes a little…which adds up to a lot.

The Creator:  This is where many will tell you that you need to be.  It's mandatory.  I think that's rubbish.  In fact, I think most people should not be here.  Why?  Because of the time commitment is huge.  Because there may not be any ROI for your company to be blogging/content creating.  And because most people will start…and then stall.  I'm not saying this isn't a smart strategy.  I'm just saying it's not for everyone.

I believe that everyone needs to be a consumer.  And as a result of actively listening…they can and should be sharing and critiquing when need be.  For many, that's where it should end.  And there's nothing wrong with stopping there.

What do you think?  Should everyone have a blog?  Are we all content creators at heart?

19 comments on “Social media isn’t for everyone”